Following it's release in April 2019, the series has been expanded with:

New to the RB series? Read about it below:

Based on a unique concept, the Cosel RB series offers three configurable isolated outputs, with one having a reinforced isolation to power Intelligent Gate Bipolar Transistors (IGBT) or equivalent applications. Certified to EN62477-1 Over Voltage Category (OVC) III, by reducing the need for an extra isolation transformer when connected to a distribution panel, the RBC200F model power supply simplifies the design process for systems architects while reducing costs. Reducing energy consumption, the RBC200F is fully digitally controlled on the input and output stages.

The unit accepts input voltages of 84 to 264VAC and delivers an output power of 207W. The product is designed for convection cooling and can be operated from -20 to +70 degrees centigrade at an altitude up to 3,000 meters, 9,000 meters in the case of storage. The RBC200F can be installed in any orientation and under standard mounting (horizontal orientation) derating starts from 50°C under convection cooling.

For higher voltages, outputs can be connected in series. All output voltages are adjustable via a built-in potentiometer.To optimize efficiency, the master output DC/DC converter is based on an LLC resonant topology when the second and third outputs are using Quasi-Resonant-Flyback topology.The RBC200F as an input to output isolation of 3,000VAC, and an input to ground isolation of 2,000VAC. The isolation voltage between the three outputs has been optimized for robotic controllers applications. Isolation between the master output and output two corresponds to a functional isolation of 500VAC when the isolation between the master output, output two and the third output is reinforced to 3,000VAC.Certiﬁed to IEC/EN62477-1 OVC III and complying with EN61558-2-16, the RBC200F can be directly connected to the installation distribution panel, eliminating the need for an additional isolation transformer.

The reinforced isolation of output three is suitable to supply voltages to IGBTs or IPMs, which reduces the number of power supplies required to power robotic controllers and high power modules in factory automation. By integrating a reinforced isolated output, the ‘three in one’ RBC200F has an equivalent footprint 40% lower than conventional solutions.The RBC200F has built-in inrush current limitation, overcurrent, overvoltage, as well as thermal protection.The RBC200F is certified in accordance to UL62368-1, C-UL (equivalent to CAN/CSA-C22.2 No.62368-1), EN62368-1, EN62477-1 (OVC III) and complies with EN61558-2-16 (OVC III).The RBC200F has a built-in active input filter, and conducted noise complies with FCC-B, VCCI-B, CISPR11-B, CISPR32-B, EN55011-B, EN55032-B and the harmonic current emission with the IEC61000-3-2 (class A).In accordance with IEC62368-1, Cosel’s RBC200F has a leakage current of 0.40 to 0.75mA maximum, though for applications requiring lower levels, the option G offers a leakage current of 0.15mA maximum. 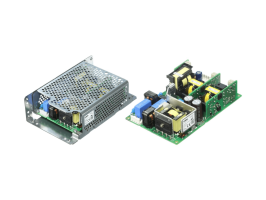